Turn Left at the Goats

You are here: Home / Slideshow Features / Turn Left at the Goats 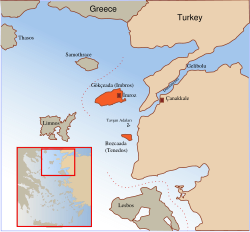 After living nearly three months in Turkey, one of my last weekends I was able to ‘do like the locals do’ and escape the oppressive heat of Istanbul for a lovely beach getaway. Bozcaada (pronounced Boze-jada) Island is one of only two inhabited Turkish islands in the Aegean amidst a sea of Greek Isles.

It is a dry, yellow-hued, scrubby little island with nice little vineyards blanketing its sunny slopes. It has a charming cobblestoned main village that is filled with mostly locals and thankfully isn’t a big stop on the tourist trail. My friends Ahmet and Cigdem (chee-dem) invited me to join them on the island for the weekend so I jumped at the chance to get out of the city for a couple of nights and have a small vacation. And, coincidentally, it was election weekend in Turkey so even the Turks that usually visit the island were headed back to their hometowns to exercise their right to vote, making it even less crowded than normal. I took an overnight bus and left Istanbul’s huge bus station, Otogar, at the ungodly hour of 1:00 am. Although the bus was plush and quite modern, it was still a slightly painful, cramped seven hour ride especially for someone like me who has as much chance of sleeping in the sitting position as I do of sitting in the sleeping position. Chew on that for awhile.

The bus dropped me off at the ferry crossing at seven in the morning and thirty minutes later the ferry pulled up to Bozcaada where Ahmet and Cigdem picked me up after their morning swim. We drove to our tiny pension, about a fifteen minute drive outside of the island’s main town. The Akvaryum Pansiyon (Aquarium Pension) is a cute blue and white six room affair that sits all by itself atop a hill overlooking the sparkling Aegean waters. 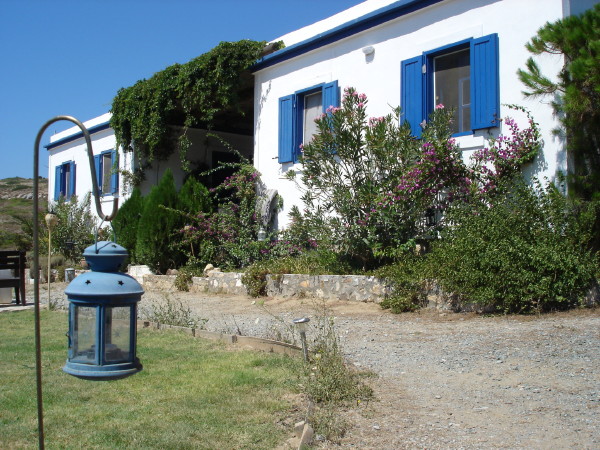 One aspect of our accommodations, which I thought might be an inconvenience, actually turned out to be the best part—there was no electricity. Not that I even really use much—I don’t travel with a hair dryer or do much maintenance on this trip. The only things I really plug in are my cherished laptop and camera batteries. Oh, and my Turkish cell phone, which I will gladly be returning to its owner very soon. But for two days charging things wasn’t really necessary. And since the steamy, hot days gave way to breezy, cool, if not downright chilly nights there was no need for a/c. Each simple tiny room was full of tea lights and candles and the grounds were staked with an assortment of tiki torches and lanterns. It couldn’t have been more idyllic and romantic.

Just a ten minute walk down a narrow dirt path through the brush was the secluded Akvariyum Beach with a few umbrellas and lounge chairs. We spent the day lazing around, going back to town to grab a bite at a cute café, justifiably called “Lisa’s,” and doing some swimming in the wonderfully clean, but icily cold sea.

On my second morning there, I met a cute Dutch couple staying at our tiny pension. Eilian and Vibeke were the kind of couple who, at least from the outside, looked perfect together. They both had sandy blond hair, sun-kissed skin, and kind of oozed a natural laid-back sexiness that was appealing. They were joined by a Turkish friend of theirs and invited me to tag along with them past the secluded beach and out to some rocks at an even more secluded spot. This was the stuff island dreams were made of. We had our own private spot with just enough smooth rocks to lay out on. And when you got too hot, you could slowly shock your body into the super frigid water by easing yourself in or take the more ‘rip the band-aid-right-off’ approach to the cold and just hurl yourself into the sea by diving straight in… I preferred the latter. 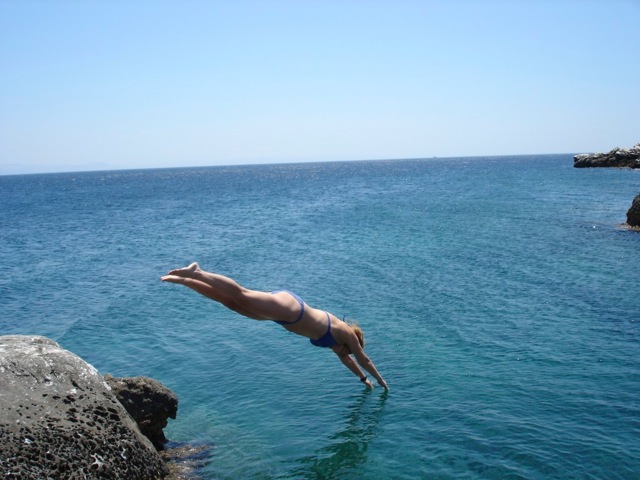 We hung out all day—snorkeling in the clear blue Aegean, sunning, chatting, munching on fruit, bread, and cheese and perfecting our dives. It was perfect. After about six hours in the sun our totally ‘hidden’ secret beach was overtaken by locals who apparently knew how to walk there too (guess it wasn’t that ‘secret’ after all). We packed up our stuff and headed back home. When I say I’ve met cool people on my trip, I don’t mean we like the same music or movies or can get drunk together. I love to laugh and have fun, but I’m also not a 22-year-old backpacker looking for a ‘non-stop party’ spending my world tour inside the world’s bars and nightclubs trolling for hot guys like other travelers I’ve met along the way. Of course, if that’s what you love to do… more power to ya… it’s just not me. I’m talking more about a vibe or a general life attitude. They are open to the world and meeting new people. They are fun, but worldly and mature at the same time. We can sit around all day and talk about life… or just about the beautiful island we are so lucky to be enjoying. These were cool people. 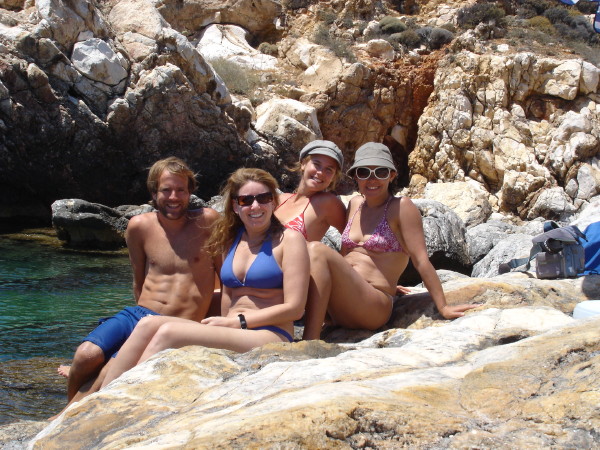 That night Ahmet, Cigdem, and I grabbed a bottle of wine and headed out to watch the sunset at the far western tip of the island. We had asked the pension owner, Deniz, a blue-eyed, stocky Turk, which was the best beach to hit for the sun. I invited my new Dutch friends along and Eilian also gave his two cents about how to get to this ‘perfect beach’ to watch the sunset.

“Okay. You’ll drive down the main road out of town until you see some goats,” he said pointing to the map. “Turn left at the goats and you’ll get to the beach.”

“Uh-huh. So these goats are always there? They are never on the move?” I asked laughing.

You know you are off the beaten tourist trail when the directional landmarks are farm animals. We, of course, passed several groups of goats on the way not knowing which ones were ‘our’ goats. So we ended up driving down a dirt road flanked on both sides by tremendous whirring wind turbines.

This installation of seventeen giant windmills was Bozcaada’s wind farm, which provides more than enough power for the entire island (minus our hotel of course). The excess power is actually sent to the mainland via an underwater cable. I was mesmerized by the ominous and  sleek towering machines and their gentle constant humming.

We found a spot to plunk down in the sand and as the giant, red sun melted into the sea we toasted to new friends and my continued healthy and happy travels.  Şerefe (cheers)! 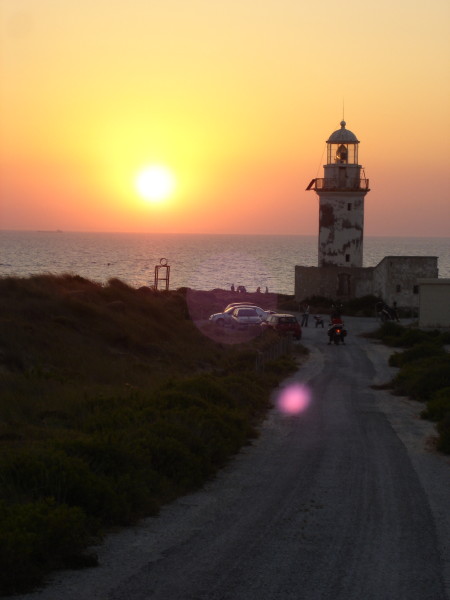 Meanwhile, back at the ranch… our pension was the only building anywhere for a few kilometers, and because it was “unplugged,” there were absolutely no lights around to drown out the night sky.

I have never seen so many stars in all my life. It was spectacular. I think the only other time I’d ever seen anything similar was at the Planetarium our dad used to take us to back at Morris County College. We saw shooting starts, constellations, satellites, the white cloudy band of the Milky Way galaxy—something I remember being able to see as a kid back in Randolph NJ, but sadly can never find amidst the bright lights of Chicago. On Bozcaada, we spent each night sitting out in the yard just gazing up at the sky. I loved it. I was in awe. There is something about seeing the universe above you to remind you just how small you are, and just how beautiful life is.

Places to Visit in Istanbul: Istanbul Off the Beaten Path
Next Post: Transcendental Transylvania