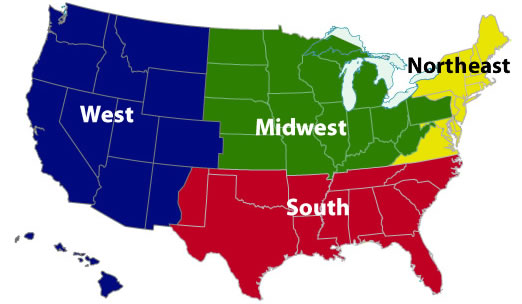 I have been living in the Midwest for more than 15 years now. I often go on and on about my beloved adopted city of Chicago, but what about the rest of the region? It’s high time I paid some attention to all the great places around this region.

Therefore, I welcome you to my new series, “My Midwest.” Over the next several months, I will be covering different cities like Milwaukee, Indianapolis, Detroit, Ann Arbor, Cleveland and more. You’ll be surprised just as I was at how cool these cities are and how much has changed over the last decade. It had been 10 years since my last time in Door County, Wisconsin. The Beauty of Door County

It’s full of green, winding country roads, quaint apple-picking farms, and sandy shores.  And it’s truly gorgeous in any season, but spring and autumn are pretty magical.  Think Cape Cod or New England, but a bit more authentic, a bit friendlier and, well, a bit more Midwest. A fellow writer on my trip created his own Door County slogan:

This “thumb” of Wisconsin is a 75-mile long peninsula sticking out into the west side of enormous Lake Michigan. Discovered by the French explorer Jean Nicolet in 1634, the Door Peninsula has more miles of shoreline, more state parks and more lighthouses than any other county in the United States. How about ‘dem apples? The county is named after the strait between the Door Peninsula and Washington Island. The dangerous passage, which is now scattered with shipwrecks, was known to early French explorers and local Native Americans. Because of the natural hazards of the strait, where the waters of Green Bay meet the open body of Lake Michigan, they gave it the French name Porte des Morts Passage, which in English means the “Way to the Door of Death,” or simply, “Death’s Door.” Ah, very romantic.

What to Do in Door County “It’s big and tall and shines a big light,” says Dwight Zeller, the Historic Site Manager. Besides those somewhat obvious attributes, this beacon of light has been operating since 1869 and still with its original lens (which was cast in Paris). As a visitor you can climb all 97 steps to the top for great views of the bay and all around. Another superlative — Door County is second in the U.S. for the number of operational lighthouses. See Door County on a Segway

Take a segway tour with Segway the Door Tours. I have to admit, I’ve always sort of avoided these, but this honestly was a lot of fun. We did a tour of Sturgeon Bay and saw the small, quaint downtown hugging the water and rolled by where they build some of the world’s largest yachts at Palmer Johnson yachts. I had to stop and peer in the hangar-like building to see the enormous, $10+ million, 150-footer they were working on.

Another great way to see the area of course is on the water. Take a tour on the water with Shoreline Charters.  According to our captain, only 20% of visitors see Door County from the water and that’s a real shame because our cruise around the bay was beautiful and relaxing. Visit some of the areas many orchards. Door County is among the top cherry producing regions in the country with more than 2,500 acres of cherry orchards. The cherry trees normally bloom in mid to late May with cherries ready for picking in mid July to early August. They typically harvest anywhere between 8-12 million pounds of cherries per year. Where to Eat in Door County

There are a few different, quaint towns on the peninsula like Sister Bay, Fish Creek, and Ephraim that are great for strolling and eating. There’s down-home American food from the throw back diner feel of Wilson’s Restaurant and Ice Cream Parlor to the more contemporary Cookery with a varied menu of salads, meats, and fish. Or experience your very first fish boil at Pelletiers Fish boil…just like the Scandinavian settlers here used to eat. Stop in Al Johnson’s for some traditional Swedish eats where goats literally graze on their grass roof in Sister Bay. Just down the street is Sister Bay Bowl, an authentic, family-owned supper club – with a six-lane bowling alley. For some locally made cheeses check out the Door County Creamery or Schoolhouse Artisan Cheese which features the largest selection of handmade Wisconsin Artisan Cheese.

Where to Stay in Door County

You can rough it and pitch a tent at Peninsula State Park, with its 3500 acres, biking trails, and eight miles of shoreline or go with some more charm at one of the many Inn’s like Eagle Harbor Inn, a whitewashed oasis of Adirondack chairs and colonial charm with all suites and a feel of “charming luxury.”

Another great stay is the White Gull Inn, a historic bed and breakfast that has been welcoming guests with a glass of cool lemonade or hot mulled cider for nearly 70 years. Disclaimer: I was a guest on a press trip during my time in Door County. As always, all opinions are my own.

Photo Essay: A “Smorgasburg” in Brooklyn
Next Post: An Unconventional Life, Travel, and Unexpected Love: I Traveled the World and Fell in Love in…New Jersey