Lisa Loves Leipzig: Things to do in Leipzig, Germany

You are here: Home / Europe / Germany / Lisa Loves Leipzig: Things to do in Leipzig, Germany

I like Leipzig! There are so many things to do in Leipzig. This charming smaller city with cobblestone lanes, a huge music & arts culture, & thriving neighborhoods is a must-visit.

At first glance, I really like Leipzig. It has what I was missing in Berlin (just about an hour northeast of here)  – its center core is filled with pedestrian-only lanes that I love in other cities in Eastern Europe, Spain, and many cities in Italy. Places for people.

Cobblestoned lanes in which cars are not allowed and families and couples come out every evening to stroll and just be out and about. I love this. There is something about this echoey feel – only the sounds of laughter, chatter, and the click-clack of heels bouncing off centuries-old buildings — that makes me smile.

It’s that old-world charm that makes me melt in Europe.  I really think I first heard this sound and felt this feeling on my very first trip to Europe back in 1996 with my friend Katie. We were walking around Venice, and the sounds of laughter, clinking glasses, and people strolling in the evening air rang in my ears like an amazing new melody.  This sound will forever transport me back there…to that first trip to that feeling – the awe of travel; to be in a different place and time to feel alive. And I never got over that feeling of life in Europe – being out and always enjoying it with your friends and loved ones. Now when I look at Van Gogh’s Café at Night print that hangs on my wall, I can actually ‘hear’ it.

Things to do in Leipzig

Leipzig may not be as well known as other big German cities like Berlin, Munich, or Cologne, but that might be why I like it. It’s a cool city on a smaller scale (pop. around 500,000) and it’s not on every tourist’s list. In 2010, Leipzig was ranked among the top 70 world’s most livable cities (by consulting firm Mercer) in a quality of life survey. It’s smaller but there is no shortage of things to do in Leipzig. The historic center is rich with the gothic architecture that I love, squares, and pedestrian lanes — the kind that has a bit of that Brothers Grimm fairy tale look that just gives me that warm and fuzzy feeling.  When what’s known as the “new City Hall” was built in 1905, you know you are in Europe.

Through the main tourism office, I took the part-walking, part-bus “Leipzig Erleben” tour through some cool neighborhoods and of course I pictured myself living here; maybe a neat flat by the river in Plagwitz, an industrial zone turned residential, or maybe in the cute Music Quarter.

I typically like to find a bike tour, but there were none going on at the time I was there, but this was a nice mix of walking for an hour plus 90 minutes on the bus going out more into the ‘hoods of the city and spots, I’d likely not walk to.

During the walking tour we saw these main sights: 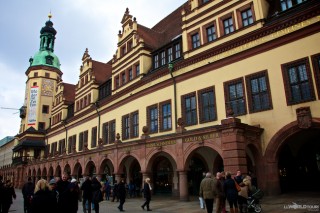 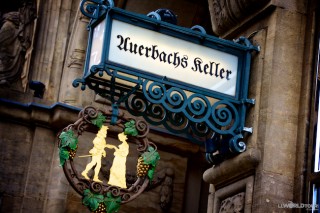 On the bus we saw:

The Music City of Leipzig

Leipzig has some deep musical roots. The city is home to a Bach Museum, as he was the music director for 27 years for the St. Thomas Boy’s Choir. Felix Mendelssohn was director of the Gewandhaus Orchestra and his home (where he happened to die) still stands. And Richard Wagner was born in Leipzig.

A new “music trail” connects many of the city’s music sites with a three-mile path. Cantatas and motets performed by the choir can be heard every Friday and Saturday at St Thomas’ Church. Leipzig’s opera tradition dates back to 1693. The Opera House is the third oldest civilian music theatre stage in Europe. Here you can see a wide range of shows from Baroque to modern operas and ballets.

Last year marked the 800th anniversary of The St. Thomas Boys Choir in Leipzig, one of the oldest and most famous boys choirs in the world. The St. Thomas Boys Choir has been a prized musical institution since 1212. While serving as its cantor, Johann Sebastian Bach wrote some of his greatest pieces for the choir to perform during his residence from 1723 until his death in 1750.

Art and Culture in Leipzig

After being housed in temporary venues for 61 years, Leipzig’s brand new Museum of Fine Arts finally opened in 2004. This 80,000 sqaure foot ‘art cube’ is the first large new museum to have been built in eastern Germany since 1945.

The Leipzig Spinnerei is a former cotton mill in the trendy Plagwitz district. It’s been turned into huge space of artists studios, galleries, exhibition halls, and even an old film projector cinema. I was really excited to tour the Leipzig Spinnerei space. Click on that link to read the post!

Monument to the Battle of Nations (Völkerschlachtdenkmal) and Museum

More than 80,000 people lost their lives before the French commander-in-chief finally capitulated on October 18, 1813. As many of you know, I am not much of a shopper, but I couldn’t help but check out the many beautiful and unique pedestrian arcades within the historic city center. These bright and airy passageways have always been associated with commerce, specifically as sites for old trade fairs. The earliest of these was built 500 years ago. In the19th century they where a place where samples of goods produced by new industrialized methods could be displayed and sold.

Today, the stone, glass and tile arcades are mostly filled with shops, galleries, and cafes. Among the best known are Mädler Passage, Specks Hof, Steibs Hof, and Stentzlers Hof.  Inside Mädlerpassage, Auerbachs Keller (cellar) is no doubt the most famous restaurant in Leipzig. It was founded in 1525 as a wine tavern. Practically every famous Leipzig visitor was a guest here including Martin Luther, Tsar Peter the Great, Nikita Khrushtshev and Queen Elizabeth II. The cellar restaurant became famous in “Faust” by famous German poet, Goethe (pronounced: GER-ta).  I still didn’t go into any shops!

Leipzig is Home to Porsche

Leipzig is the home to one of Porsche’s manufacturing plants. Porsche Werk Leipzig offers factory tours and exciting driving events on the facility’s test track and/or off-road circuit. I wish I was about to tell you how I test drove drive various Porsche models, but unfortunately, my visit was short and I didn’t have time to visit, but I still think it’s worth noting – it’s here and if I can’t go…you should and then let me know about it! Porsche is said to be very involved in the community. Most recently, they donated 1.8 million Euros for the restoration of the biggest organ in Saxony inside St Nicolas Church.

Where to Stay in Leipzig 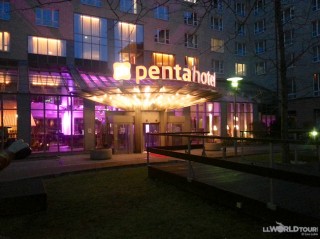 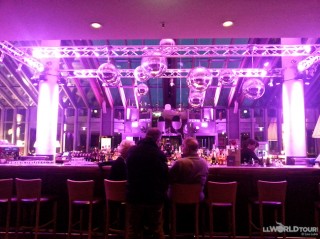 During my time in Leipzig, I stayed at the trendy and modern Pentahotel. They are going for what they call…a more informal atmosphere and great design.  The lobby greeted me like a punch in the face from a nightclub with a huge atrium of glass, flashing lights, disco balls, and girls at the desk in cute, tight tops. One side has a cozy area for reading while the other side is the hotel bar/restaurant, open and airy with decent eclectic fare (salads, burgers, chicken, etc.).  I actually felt like a business traveler here because I even ate at the lobby bar one night. It’s not something I usually do, but honestly, I was tired, it looked fun, and was actually quite tasty. 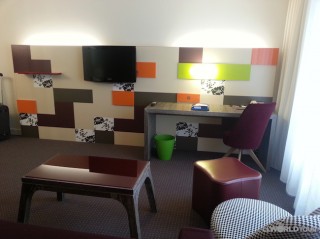 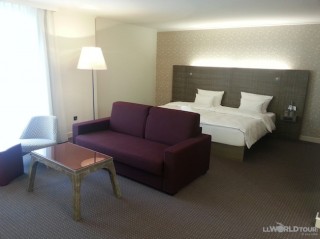 The room was clean, minimal, and modern, just how I like my hotels. It had a great work station with full dock for plugging in all my devices and whatnot.

Check out my other Leipzig Posts: Eat the World Leipzig and the Spinnerei Leipzig. 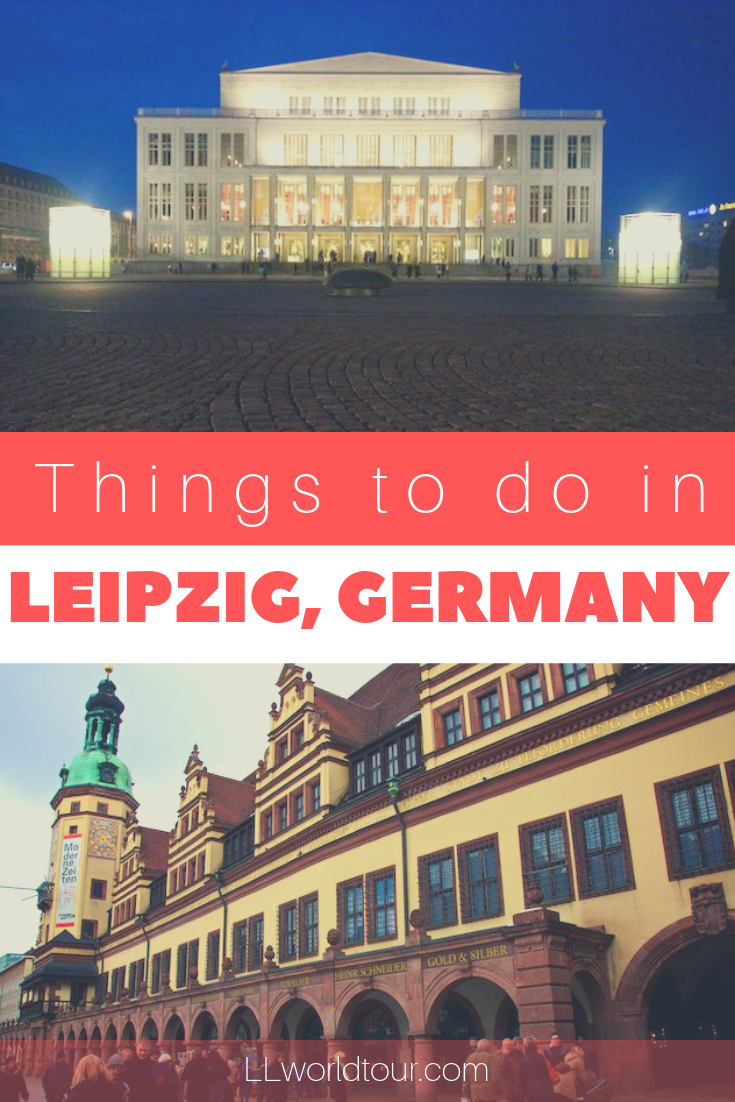 Disclosure: During my few days in Leipzig, I was a guest of Leipzig Tourism and Marketing GmbH, as always, all opinions here are my own.

Video: It’s Electric! A Boat Ride on the Chicago River
Next Post: Eat the World in Leipzig